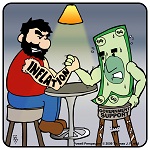 Has anyone ever told you that your savings account is losing money even though you are getting interest.Â  The reason is inflation.Â  Inflation is the rate at which the level of prices for goods and services is rising, and purchasing power is falling.Â  This means as inflation rises, the price of goods and services rises.Â  Have you noticed the price of gas is higher than it was 10 years ago?Â  I remember gas being $1 a gallon.Â  That price increase is due to inflation.Â  Inflation occurs when the value of money falls, decreasing purchasing power.Â Â As inflation rises, every dollar that you have will buy you less.Â  For example, a candy bar that cost $1 a year ago would cost $1.03 right now with an inflation rate of 3%.

Most of the time, central banks keep inflation rates around 2-3%.Â  Here is a little insight to the inflation rate in the US over the past 10 years.

For the most part, the central bank has done a good job of keeping the rate steady.Â  That isn’t always the case.Â  In 2009, the rate of inflation was -.34%.Â

A steady rate of inflation is actually a good thing.Â  When the price of goods increase, business growth increases.Â  That results in increased hiring and expanding.Â  The end result is more spending andÂ a growingÂ economy.Â

OverÂ the past few years, the Central Bank enacted quantitative easing I and II in order to help the economy.Â  QE is a monetary policy used to increase the money supply by buying government securities from the market.Â  QE increases the money supply by injecting financial institutions with capital, in hopes they will increase lending.Â

The reason I bring up quantitative easing is because it can increase inflation.Â  QE means more money is being printed and circulated.Â  When there is more money floating around, but the amount of goods for sale remains fixed, inflation will rise.Â

The Central bank pumped more than $1.6 trillion into the economy from 2008-2011.Â  While inflation rose from negative 2.5% to over 3% in that time frame, it is likely that it will rise even higher very soon if the central bank doesn’t make adjustments.

What are your thoughts on inflation?